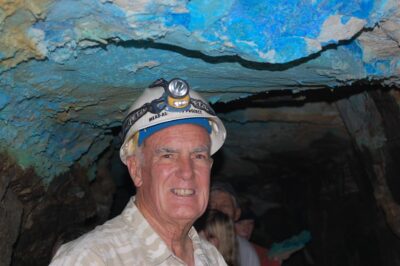 Stuart Kenneth Harrah (SKH) was born in Chicago, Illinois to Katherine and Kenneth Harrah on October 5, 1937. His sister Shirley was born in 1942. The family moved to Arizona when Stuart was 10 in an effort to help his mother find relief from her severe arthritis.

Stuart graduated from West High School, Phoenix, Arizona, in 1955. He attended Phoenix College for two years after which he became a construction apprentice. He worked for a few years to earn money to pay for further college. During that time, he met Judy who was entering her senior year in high school. They met on a blind date in 1958 and were married in 1960. Stuart began attending ASU while Judy worked to support them. He earned a bachelor’s degree in Civil Engineering and went to work for Salt River Project (SRP) as his first job after graduating. Their first child, Michael Stuart, was born in 1962, their only daughter, Kristy Kay, in 1964, and their last child, Douglas Scott in 1966.

Stuart loved the great outdoors and spent any and all his spare time exploring, hunting, camping, hiking, and adventuring with various members of his family and friends. Camping in California, Colorado, Arizona, and Mexico was just the beginning, as was hunting for elk, deer, and javelina.

In 1976, Westinghouse offered Stuart a job to build a substation in Venezuela. Stuart and Judy saw this as a perfect opportunity to broaden their family’s cultural experiences and took off for South America. Before leaving, John Scott, a foster son, joined the family and relocated with them. The family lived in Venezuela for a year and a half where Stuart continued to explore his surroundings with camping expeditions, boat rides, and a small airplane trip to view Angel Falls. When presented with the opportunity, Stuart acquired a pet sloth for the family.

In 1977, the family returned to the United States where Stuart had his orange Blazer shipped to Florida so that the family could undertake an epic camping trip from Florida to Arizona. Upon completion of the trip, Stuart once again returned to SRP. Stuart and Judy settled back in their original house in Chandler (kicking out Pam and Jim who promptly moved down the street) to continue raising their family and going on adventures. Stuart and Judy opened their hearts and home to Ada, Delia, Kena, Dora, and Celina, just adding beds in various rooms.

While at SRP, Stuart developed a very regular routine of lunch outings to restaurants around SRP with his colleagues. On a certain day of the week, at a specific time, you could find him and his co-workers at the Chuck Wagon, Monti’s, or another favorite restaurant ordering the same thing week after week. Clockwork!

In 1986, Kristy married Rob, adding another adventure partner to the mix while Doug was sick and unable to go (Doug was homebound for many years with health problems). In 1995, Stuart’s first grandchild was born, granddaughter Shelby. Sierra followed in 1997 and Trey in 1998. Stuart was there for every birth and became an amazing grandfather.

Stuart retired in 1998. His crowning achievement at SRP was being Project Manager for the Mead Phoenix Project, although numerous other professional accomplishments were achieved throughout his years at SRP. His hiking achievements include Mount Whitney, the highest peak in the continental US, Yosemite Valley and Half Dome, the Grand Canyon (including Havasupai Canyon, rim to rim to rim, and Phantom Ranch) numerous times, Mount Lemmon, and Weaver’s Needle. Stuart became a track and tennis superfan due to his grandchildren’s sports careers. (Later becoming a volleyball superfan as well, watching his grandniece, Kaley Koester).

In 2005, Judy and Stuart purchased a home in Ridgway, Colorado where they spent 10 summers in the beautiful mountains. Each summer, family and friends visited them in Colorado and many more adventures were had. After Judy passed away in 2017, the Colorado house was sold as Stuart found it too lonely without Judy.

In 2017, Stuart and Doug bought a side-by-side UTV and started regularly taking trips throughout the state of Arizona. Stuart also went on outings with friends (Chris, Mark, 4-wheel drive group) and took trips with Kristy and her family to visit his granddaughters at college. Kristy and Stuart also took bucket list trips over the last few years of his life. Stuart’s 85 years were packed full of regular routines, generous giving, sweet foods, rich relationships, and amazing adventures. He truly was one of a kind and will be greatly missed by many.

Stuart passed away on November 15, 2022 with his children at his side. A memorial service will be held on November 19, 2022 at 11:00 am at Arizona Community Church, 9325 S Rural Rd, Tempe, AZ 85284. Memorial gifts can be sent to the Ridgway Railroad Museum located in Ridgway, CO, a place where Stuart donated many hours of his time. (www.ridgwayrailroadmuseum.org)