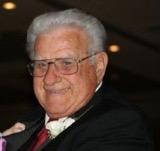 Len Edward Willis Jr., 88, died peacefully in his Sun Lakes, AZ home on September 27, 2020, surrounded by his family. A veteran of the Korean War, he was awarded an Ambassador of Peace medal for his service.

Len was born on August 31, 1932 in San Jose, California to Len and Madeline Willis. In 1950, he joined the armed forces and was assigned to the Naval Training Center in Coronado, California. He served as a radar operator flying in a US Navy Douglas AD Skyraider. During the Korean War, he was deployed in the 1st carrier strike task force stationed on board the USS Valley Forge CV 45. He was honorably discharged in 1953.

Len retired from State Farm Insurance in 1999, having worked 15 years in the auto claims department as an estimator. He and his wife Lois moved to Sun Lakes, Arizona in 2000, where he loved to spend time with his family, watch his Arizona Diamondbacks, and give his beloved dog, Bear, too many treats.

He is survived by his wife Lois Willis, his children Ed Willis, Cliff “Kip” Willis, Tina Woo, Kimberly Rebber-Hetu, Donna Schweitzer, and Amy Cook, as well as 20 grandchildren and 12 great-grandchildren. He is preceded in death by his parents Len Willis and Madeline Lewis, his sisters Betty Adams and Barbara O’Meara, and his oldest daughter, Debby Minter.

Services will be held on Saturday, October 24, 2020 at Risen Savior Lutheran Church, beginning at 2pm, followed by a graveside service at Valley of the Sun. In lieu of flowers, donations can be made to the Infinity Hospice Foundation ( https://infinityhospicecare.com/contact/locations/hospice-care-phoenix-az/ ) or Neighbors Who Care ( https://neighborswhocare.com/donate/ ).