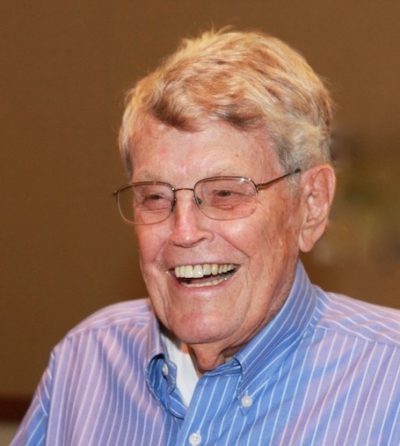 The family of Joseph “Joe” C. Hogan announces his passing on August 18, 2016 at Friendship Village in Tempe, AZ after a wonderful long life and thankfully a brief decline in his health. Joe was born on May 26, 1922 in St. Louis, MO and lived an accomplished life raising nine children and achieving professional prominence. Although Joe had many outstanding professional achievements in his life, Joe’s highest achievement was his marriage of 64 years to the love of his life, Betty, and the large family that they raised together and loved dearly. In 1944 while in the Navy, he met the love of his life Betty Carrere, a Navy nurse. They were married after a brief courtship, living first on Ocracoke Island, NC. Throughout their life together they also lived in Columbia, MO, South Bend, IN, Hilton Head, S.C., as well as Tempe. Betty predeceased Joe in 2008. He is survived by his eight children: Mary “Mimi” Hogan (PJ Hill); Susan (Greg) Pasternack; Thomas Hogan; Stephen (Ann) Hogan; Michael Hogan (Cindy Noe-Pope); Martha Massey; William (Jan) Hogan; and Daniel (Melanie) Hogan. Joe and Betty lost their firstborn son, Joey, at a young age. ‘Pop’/’Poppy’ was also beloved by their 15 grandkids and 9 great-grandchildren. Joe also leaves his cherished friend Joan Strawn, who shared his joy in travels, plays and family. After graduating from Washington University in 1943 with a degree in electrical engineering, Joe joined the U.S. Navy becoming one of the “Greatest Generation”. As an officer of a deceptive warfare project, he saw action in the Philippines during the closing days of the war. He continued his engineering studies earning his MSEE from the University of Missouri and his PhD from the University of Wisconsin. He became the youngest Dean of Engineering at the University of Missouri after teaching and researching there for several years. He became Dean at the University of Notre Dame where for 14 years he advanced the academic and endowment stature of the Engineering College. He was active in professional organizations promoting engineering education, especially for women and minorities. Joe and Betty retired first on Hilton Head Island, SC, before moving to the Phoenix area. Joe and Betty were actively involved in the lives of their children, and instilled in them values of humanity and compassion that remain as cornerstones in their lives. They loved to travel and visited many parts of the world exploring other cultures and sights. As recently as September 2015, he traveled to the Cascade Mountains of Washington to attend the wedding of a grandson with all his children. A Celebration of Life will be held at Friendship Village in Tempe for family and friends on Sunday, September 4th from 1:00 – 3:00. Memorial donations can be made to Joe and Betty’s favorite charities: Maggie’s Place in Phoenix, AZ or Logan Center in South Bend, IN (http://www.logancenter.org/donate/). The family expresses its gratitude to the caring staff of Friendship Village and Hospice of the Valley.