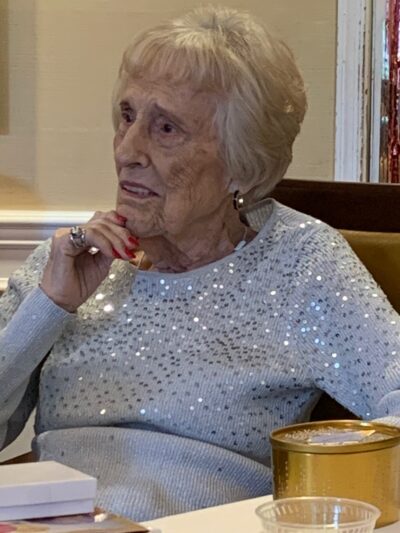 Joan Kelley passed away on April 29, 2022 at Chandler Memorial Hospital after a short illness. Joan was born on June 21, 1926 in Eagle Grove, IA to Thomas and Margaret Whitty. She grew up in Clarion, IA where she graduated from High School.

After high school Joan was recruited to work at the Veterans Administration in Des Moines. She worked in Des Moines and California before moving to Denver where she worked at Lowry AFB.  She then moved to Colorado Springs and became the Personal Secretary to Brigadier General Robert Francis McDermott at the Air Force Academy. It was during this time that Joan met Bernard Kelley, also originally from Iowa.  They were married on November 19, 1960.  It was a match for the ages.  They made Denver their home for over 20 years.  After marriage Joan traveled with her husband and both were manufacturer’s representatives for home furnishings from both Denver and San Francisco where they moved in 1982.

In 1998, Joan and Kelley (as Bernard was known) left San Francisco and moved to Sun Lakes, Arizona to enjoy the weather and play golf!  They formed many friends through their golfing activities and gatherings were frequent and fun, just like Joan and Kelley. They were also very active in St. Steven’s Catholic Church serving in many capacities for a number of years.

Joan was preceded in death by her parents, her brothers Donald T. and Thomas E., her sister, Sister Marilyn of the Sisters of Mercy, and her husband Bernard.

Joan is survived by her sister Margaret Louise Whitty Ehmke and many nieces, nephews and grand-nieces and nephews!