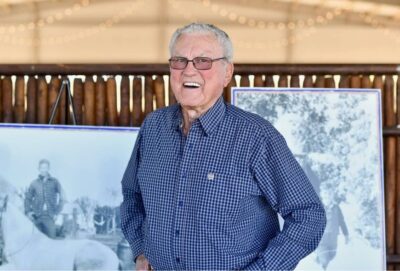 He attended Chandler High where he played football and basketball and was class president. He also met the apple of his eye, Gloria. He lived on the property his father purchased in 1917 and later built it into what it is today. After high school he joined the Air Force and spent time in Hawaii and Texas, while starting his family. He returned to Chandler and began a career at AirResearch, Garrett, Allied Signal which are now Honeywell. He participated in their annual rodeo each year and always won many awards, buckles, and saddles. He loved roping and also belonged to the Chandler Sheriff Posse.

Jarrell once said the key to a good life, “a great wife and kids. If you can live your life to bring honor to yourself and your family. You will be fulfilled.”

A loyal husband of 67 years, a father to 6 children that multiplied so that on any given day you would find a couple or a dozen spread across their childhood home. If you came to visit, you’d most likely find him sitting in his chair at the kitchen counter, on most days with starched jeans, boots, a buckle and button up. Surrounded by cattle, orange trees, and century old pecan trees, always a pecan cracker not too far from his hand. You could sit with him to watch the sunset across the pasture or take dusk rides on the ranger to feed the cattle. He’d be sure to always carry a knife in case you needed it, he would tell ya the truth when you didn’t ask for it, share his stories with anyone who would listen. He loved his friends and his family. He enjoyed going to the cabin, hunting, and riding his ranger and quad.

If there’s a highway to heaven, we imagine him driving in the fast lane, eager to join his wife, Gloria and daughter Jeri Lynn Albin, his brother and sister and his parents.

Services will be held Thursday January 19 at 10:00 am, Bueler Mortuary in Chandler.