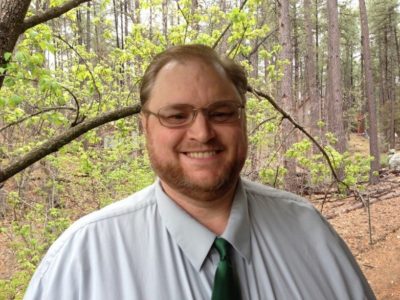 James Aaron Wilson, 52, died on December 31, 2020 at Banner Estrella Hospital in Phoenix, Arizona. He had stopped breathing due to flu and reduced heart function on the night of December 28th and never recovered consciousness.

He was born in Long Beach, California on October 10, 1968 to Larry Lynn Wilson and Carole Craddock Wilson. He graduated from Mesa High School in 1986 and studied at BYU.

He married Shawndi Ault-Hart on April 2, 2016 in Prescott, Arizona. They were sealed in the Gilbert Arizona Temple in September 2018.

Jim was an active member of The Church of Jesus Christ of Latter-day Saints. He faithfully served a mission in Osorno, Chile between 1987 and 1989. He served in many callings over the years, including three times as executive secretary, and especially loved teaching children and participating in scouting. He was an avid fantasy writer and completed several novels and published a few through Timbuktu Press. He worked in computer sales and information technology from his teens on, but recently was going back to school to work toward becoming a history teacher. Jim had a lifelong love of reading and had just finished reading to his son shortly before his breathing stopped.

He is survived by his wife and stepsons, Jesse and Benjamin Griffith, and an extended family including his mother and father, Carole and Larry Wilson, his siblings, Richard, Stephen, Daniel, Wendy, Lindsay, and Julie, and a crowd of nieces and nephews who were very close with him. Jim’s influence was felt by all who knew him, and particularly by his cousins, aunts, uncles, family-in-law, and friends.

Funeral services will be Saturday, January 9th, at 10am in the Tolleson Chapel at 701 North 95th Avenue (85353) under the direction of Bishop Witcher of the Tolleson 1st Ward. A viewing will take place at 9am.

Funeral will be streamed here: https://youtu.be/97c6GOQz-UE