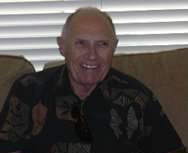 Dr. Keith Charles Thomas of Gilbert, Arizona passed away on May 13, 2018 at the age of 86 with his wife, Glee, by his side.  Keith was born of May 3, 1932 in Carroll, NE to David and Helen Thomas.  The family moved to Valentine, NE where Keith graduated from High School in 1950.  While in school, he did lawn work for a local dentist who often told him he should go into dentistry; Keith took his advice and attended Creighton University in Omaha.  Keith joined the Air Force ROTC, and upon graduating from Creighton in 1956, he enlisted in the United States Air Force.  He spent two years of his service in Japan, where he met Beatrice Majkut, an Air Force nurse.  After leaving Japan, Keith was stationed in Boise, Idaho, where he and Bee were married on July 3, 1959.  Keith and Bee then moved to Chadron, NE later that same year and Keith opened the dental practice he loved for almost 40 years, until his retirement in 1998.  Chadron was also where they raised their two children, David and Lou Ann.  Keith was an active member of the Kiwanis Club and served two terms as President of the School Board.  Bee Thomas passed away in 2002 at Crestview Manor in Chadron, and is buried in the Catholic Cemetery. In 2003, Keith married Glee Mehner.  They lived in Chadron for a short time and then moved to Arizona.  Keith is survived by his two children: David and wife Shirley Thomas of Chandler, AZ, and Lou Ann Thomas of Oxnard, CA.; four grandchildren: Jamie Thomas Buchanan, Andrew, Keith and Jeff Thomas; and four great-grandchildren. Keith is also survived by Glee’s children: Tim Mehner, Jan and husband Garry Keeton of Blue Springs; their two children: Ben Whitesel, Angela Heish and four great-grandchildren.  Keith was preceded in death by his parents, David and Helen Thomas and sister, Blanche Chicoine.