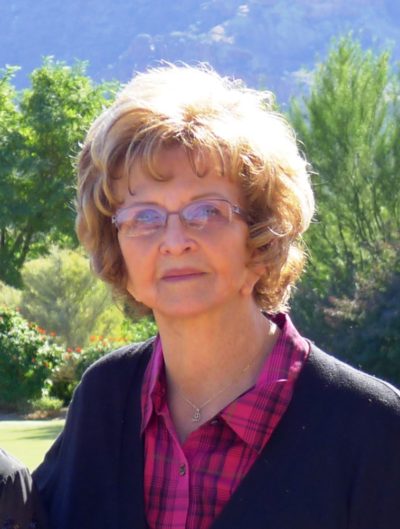 Donna Dean Ellsworth-Bolen, an Arizona native for 90 years, passed away Monday, February 7, 2017. She was born on March 20, 1926, the youngest of 10 children, to John Reo and Zumala Larson, in Mesa, Arizona.  She was raised in Mesa until she moved to Chandler when she was 14. Donna graduated from Chandler High School. It is there where she met Max Ellsworth, whose father managed Richards Ranch. In 1942, they got married in Florence, Arizona with 6 other couples, before the boys were sent to war.  Donna then went to Texas, where Max was trained, until he was shipped out to Europe. After the war, they bought a house in Chandler where they raised their family. They had 2 children: Terelyn and Bryan. Later, after 2nd thoughts, they had their 3rd child, Tani. Though a loving and dedicated wife and mother, Donna’s true passion was Real Estate. She got her Real Estate License in 1954. Then became a Broker in 1956 and started her own company, Arizona Enterprises. She knew all the farmers and their families in the East Valley and had a good relationship with them. She was always honest and respectful; her roots were their roots. So instead of houses, she sold cotton fields.  For decades, she had an active part in Chandler’s growth from a small farming community of several thousand to the large city it is today.  She brought in Intel and Motorola onto alfalfa fields just west of town. Then she sold 2,560 acres to the retirement community of Sun Lakes south of the town. She served on the Chandler Planning and Zoning Commission and became the first female member of the Arizona Association for Economic Development. She sold the land for many of the city’s industrial zones and planned residential communities. She was a long-time board member of the Downtown Chandler Community Partnership and received several achievement awards from the City and the State for her service and contributions to the economic development of the region. She never retired, still had her office in Chandler, and was still working on deals up to the time of her death. Her husband Max died in 1980. After his death, an old school friend, Frank Bolen, asked Donna to sell some of his land. They were married a year later. He was the only grandfather Tani’s children knew. Frank died in 2005. Donna was the last surviving member of her family.  She is survived by her 3 children: Tere (Rod Riggs +), Bryon (Evelyn) and Tani (Jim Earnhardt). She has 5 grandchildren, 9 great-grandchildren and 2 great-great grandchildren. In her long life, she touched the lives of many people. She could drive you crazy talking about Real Estate and was quite opinionated, but she was caring and unselfish, and she was well loved. She is already sorely missed. The funeral will be located at The Church of Jesus Christ of Latter-day Saints Grover Ward, 3770 S. Cooper Road, Chandler, Arizona 85286 on Thursday, February 16, 2017.  A visitation will be held at 9:00 am and the funeral services at 10:00 am.  Interment will follow at The Valley of the Sun Memorial Cemetery, on Chandler Heights Road, between Arizona Avenue and Alma School Road.