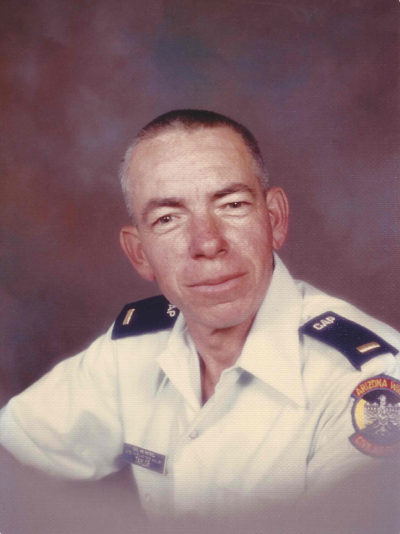 Allen Mitchell Taylor of Camp Verde, AZ   passed away January 20, 2021, of complications of Covid-19.  Allen was born in Clemenceau, AZ May 22, 1935, to Harness and Esta Taylor and was raised in Chandler, AZ.  Disabled as a child with a brain tumor and surgery, he suffered from grand mal seizures for much of his life.

As an adult, he resided in Bisbee, Payson, and Camp Verde, AZ.  As a child, he was active in Boy Scouts of America and later, as an adult, volunteered as a Scout Leader.  Anything to do with aircraft was his passion and he volunteered with the Civil Air Patrol.  Later in life, it was his pleasure to act as a score keeper for school sports teams.  He also enjoyed seasonal hunting and fishing as well as making wooden yard art.

At family gatherings, he took great pride in making sure there were plenty of entertaining games and toys available for the kids. He used to bring a go-cart for the kids to ride around on. As one of his great-nieces put it “Uncle Allen was always fun”.

Allen was preceded in death by his parents and two brothers, Thomas O. Taylor, and Stanley C. Taylor.  He is survived by a brother David E. Taylor of Flagstaff, AZ, three sisters Marilyn Felix (Donald) and Carolyn Shelly of Chandler, AZ, Jean Bridges (Jerry Smith) of Tucson, AZ, and sister-in-law Dusty Taylor of Cottonwood, AZ as well as many cousins, nieces, and nephews.

Because of the pandemic services will be planned for a later date.