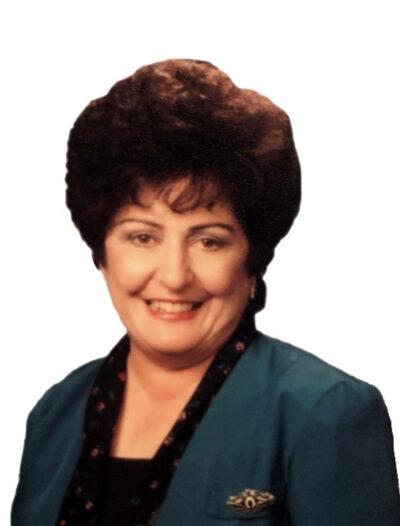 She was born in Kremmling, CO to Alice DeBerard Brown and William (Billy) Brown on November 4th, 1932.

Vangie was one of the granddaughters of an iconic pioneercattleman, Fred C DeBerard and his wife Myrtle. They along with their children and grandchildren created a great legacy with the DeBerard Cattle Company that has been passed down to all their descendants.  This included a long line of independent, strong women long before the women’s liberation movement.  They worked side by side with their spouses, were never in the background, had opinions, voiced them, and those opinions carried the same weight as any man’s.

Vangie grew up on the Peak Ranch 20 miles north of Kremmling, Co.  She attended a one room schoolhouse that had 8 grades.  She always said that you learned much faster because you were exposed to the lessons for all 8 grades. For many years the house she grew up in had 7 adults, 7 kids, (Granny and Grandpa, 3 sisters, 2 spouses, her brother Fred and 5 cousins and her). There was also one long bedroom that usually had at least 4 hired men living there, too. It was on that idyllic ranch she learned to sew, knit, play the piano, cook, fish, and later climbedon a horse and moved cattle. She then graduated to driving tractors to feed cattle and working in the hayfield.  It was a vast playground. She, Fred, and her cousins spent many hours on Baby Peak Mountain imagining moving cattle and building houses in the forest.  She said that the happiest day of the year was not Christmas but the last day of school so they could get involved in the ranch activities. They didn’t consider it work.

As she got older the grandkids helped with the grooming andgetting the show cattle ready for the show ring.  Alice learned a lot from Grandpa about cattle, helping care for the animals and participating in calving, selecting the best for breeding, fitting,and showing. They also helped follow through to the finished product for the ranch which included showing various types of animals at local and national shows, holding sales events at the ranch and other locations. She became especially close to her cousin Jean, playing together growing up, and then working together as they groomed cattle when they were young adults. She always considered her a sister.  Her older brother Fred passed away from a tragic horse accident working for the ranch when he was 29 years old. He left behind his wife and 5 kids. Alice and her parents were devastated.  He was one of those grandchildren to carry on the legacy.

In 1949 she married her high school sweetheart William E. Ingram and after graduating from high school they went to 2 years of college at Colorado State University. In 1952 they went back to Kremmling and start leasing the Pinto Valley Ranch from her grandparents.  During that time, they put in 200 more acres of hay land and made many improvements.  They also had 4 children, Gary, Tim, David, and Debbie who grew up there. She was a true rancher’s wife, a bookkeeper, child wrangler, cleaner of all types, pet supervisor, nurse, photographer, botanist, organizer, cook (which included a few hired hands year-round and during haying season 15-20 people) and then helped outside with irrigating, riding, and haying or wherever she was needed.  No holidays or vacations except some trips to show 4H steers around the West.

In 1973 they sold the Pinto Ranch and moved to Challis, Idaho purchasing the main ranch (Warm Springs). Then over the next 2 two decades purchased two other smaller ranches, one on the East Fork of the Salmon River and one in the Pahsimeroi Valley 30 miles to the north of Challis for a total of 1,800 deeded acres.  At one point they were raising 2,200 head of mother cows andgrazing over a million acres of BLM and US Forest lands in the summers.  After the 1983 earthquake between Challis and Mackay ID, their main source of irrigation, the Warm Springs,dried up for 2 weeks then came back 7-fold. This caused erosion and silt flowed down the Salmon River for several miles. With Will’s entrepreneurial spirit and risk taking, and Vangie’s pragmatic vision they put in two private hydro-electrical plants to generate electricity that was sold to Utah Power and Light.They made a good team.  During this time her mother wasdiagnosed with colon cancer. Being a diligent daughter and the only child left, she moved both her parents to live with her and Will and took care of them until they passed away.

They spent years on the ranch dealing with challenges with the government, wild horses, riparian fish habitat, and wolves to name a few. She was always the one to take care of such matters. She used her intelligence to try to get the best resolution possible and she never backed down.  One of the first collaborations in the nation between ranchers and the BLM and US Forest Service was the Stewardship program which was started in the Challis area. The Ingrams were very involved in the Stewardship program and over the years there were many similar programs started across the nation.  Vangie managed a major conference for several Stewardship programs and gained recognition for her efforts.  She was also Farm Bureau Women of the Year during this time. She was instrumental in getting an EMT program started in the Challis area. She got her EMT certification and helped for several years.

After Will had some medical issues they sold the ranch, retired, and traveled around the west in a 5th wheel to decide where to live.  They lived in Nipomo, CA and Sequim, WA for a few years and then settled on Florence, AZ where some high school friends were living.  In retirement she spent hours over a few years documenting the DeBerard family legacy.  As always, she was a perfectionist and never felt that it was completed.

Vangie was the matriarch of the Ingram family and although short in stature (barely 5’) she was strong in resolve and fortitude.  She was very welcoming, happy to see you, and always had a meal that could be prepared quickly for any guests that stopped by.  Painting, growing flowers, plants and trees were some of her passions. She was avid about learning. She was very interested in gaining knowledge about life, people and appreciated in-depth conversations. She liked the challenge of a good bridge game. She had too many things to do and didn’t see a lot of value in watching TV except for the news. When it came to health, she was on top of it, journaled all issues that she and Will had, documenting health records and was very proactive.  William will say he has lived much longer because of her.

Here are some thoughts from her grandchildren:

Selfless, happy to see you no matter how she was feeling.

Always teaching life lessons: Carry a Folgers coffee can in your vehicle because you never know where the next bathroom is

Was adamant about correct grammar and continuing your education

She gave the best back rubs and “counting the bones”

Good referee and mediator, and navigated a lot of relationships successfully

When she went golfing in the mountains she was referred to as the Hobbit.

Was involved in all deals and the business side of their lives…. Kept grandpa grounded

After she had some seizures, a stroke, and COPD, she started experiencing dementia that steadily worsened. Even with the decline, she always knew who you were, said she felt good, and had a tremendous positive attitude. She lived 10+ years with these issues but kept going like the energizer bunny. When she couldn’t find the thought or word, she would just say “I can’t remember”, or “I’ll tell you later”.  She always had that wonderful look in her eyes that expressed she loved you and really appreciated the time to just sit and hold your hand without saying a word.

She is survived by her husband of 72 years William, her children and their spouses, Gary (Jackie), Tim, David (Corrina), Debbie (Holland), and 6 grandchildren, Mark, Julie, Jamie, Jacob, Holly Will, and Alicia, along with 8 great-grandchildren.  Her ashes will be spread over the Colorado ranch later.